DO NOT do any of these if blogging is important to you!

Ok, truth: this is really a list of five stupid things that have kept ME from blogging for the past month…

1. I got in a fight. Not like punching or anything. My mom and I drove to Idaho with my daughter and bunked at my oldest cousin’s house. We arrived late, but stayed up talking. My cousin said things about gay men and the government. The throbbing in my ears blocked out most of what he said (even my face was pulsating), but I felt like clawing and crying and driving the six hours back to my house. I didn’t, though. My mom tried to make it better by bringing God into the foray. I’m still not sure whose side God was on, but all the hubbub caused me to lose control of basic functions, like speaking and hearing and maintaining a resting heart rate. I couldn’t blog during that whole trip.

2. I  went to a slumber party. Me and some other lady writers rented a little cottage at Alderbrook Resort for three days. Super awesome. The resort sits along the picturesque Hood Canal. They have a pool, steam room, and sauna. We stayed up late and listened to nineties dance music while we wrote about traumatic stuff.  It was kinda like Girls Gone Wild meets Joyce Carol Oates. I wrote exclusively on my novel; I couldn’t blog.

Me with my writing mentor, Scott Nadelson.

3. My teacher spent the night. This sounds worse than it really was. In my MFA program, we work directly with established writers who act as our mentors for a year. My mentor for this year just published a memoir, and because  I help coordinate a local reading series (Gray Skies), my mentor drove here from another state to read at the series from the memoir. He stayed the night at my house. In the GUEST ROOM, for those who were thinking untoward things.

But anyway, I was stressed out about having my mentor at my messy house, making sure people showed up for the event, and making sure my mentor didn’t find out that I am barely capable of functioning appropriately in social situations. It was all fine, but for the whole week I couldn’t blog. 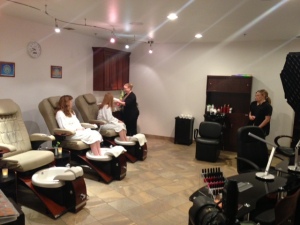 This is a photo from the commercial filming. I am the curly-haired girl with my feet in the water.

4. I was in a commercial for a casino spa. Fer reals. I wore a fluffy white bathrobe. Unfortunately, the out-of-norm focus on my physical self resulted in a shame spiral only Kim Kardashian could understand. Except that Kim’s Larger-Than-Hollywood-Girl-Standard body is on every smut mag in the grocery store and my two seconds of bathrobed fame may only be glimpsed by guests of the casino hotel. Or nobody. Or possibly every TV watcher in Washington. I don’t know. I couldn’t blog because I felt so bad about myself. For weeks! Just thinking about it now makes my eyelid twitch.

5. My eyelid is twitching. Incessantly. Unrelentingly. And it’s been like this for nearly a month. I went to an eye doctor who launched into a speech about how EVERYONE gets twitches sometimes, even HIM, and how we just need to wait these things out, blah blah blah. While he finished lecturing me, I gave him the (twitchy) Stink Eye. Later that day, I received an unsolicited email from him in which he apologized for “his shortcomings for not making the visit as satisfactory as we would have both wanted,” but made it clear that he is “confident in his diagnosis” that I have an eye twitch and offered to waive the co-pay so that I can see another optometric physician if I wanted. I already know I have an eye twitch and what I want is for it to go away.

I had a twitch like this once before, maybe a year or two ago, and was given a steroid, which worked back then, so I am now self-medicating with leftover drops of Fluorometholone. Should I keep doing this? Should I write the “optometric physician” back? I don’t know. The twitch has now diminished enough for me to blog. So I’m blogging.