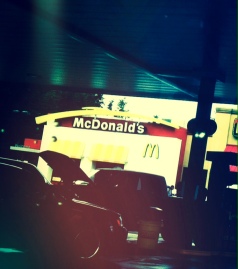 Last night I was telling my husband why I’ve been such a bitch lately. I get lost, see. I get sad and lonely and feel unworthy. Then I do bad things.

Yesterday I didn’t want to use the internet at my house because we were on the verge of going over our gig limit. (I like the word gig.) So I went to McDonald’s for their wi-fi and french fries. No need to judge me, I already have.

It’s a truck stop McDonald’s so it has these big flat screen TVs that are always tuned to Fox News. Last time I went there, like two weeks ago, the talking head people were ranting about changing sports team names from potentially offensive names to potentially inoffensive, but lame names. They were ranting about that again yesterday, which I thought was weird and gave me an eerie Groundhogs Day feeling.

Anyway, I’m at McDonald’s trying to ignore the big TVs (and the feeling of shame for eating at McDonald’s) by watching Brené Brown’s Ted Talk on vulnerability on my phone and I started crying a little.  The truckers didn’t seem to notice.

I’m not a fragile flower or anything, it’s just that what she said about shame and feeling unworthy and how it keeps you from connecting with people…well, I realized I was doing that.

This is from Brene Brown’s presentation.

I was self-sabotaging by hating myself and by extension, hating other people, especially the truckers who didn’t care that I was sad because maybe they were busy watching TV or also sad or just not good at noticing things.

I was REALLY lonely and blamed my husband (and maybe the truckers, because they were just sitting there), even though I was the person responsible for my own alienation. I was being a GIANT DICK to the people who love me the most, hoping that by being a dick, they would see how sad I was and would comfort me.

Serious. I was doing that.

Moral: My husband is a saintly, patient person. If I can’t convince myself that I deserve to be loved by him, I will inevitably screw up our relationship.

Third Moral: Thank God my husband is–and I don’t fully grasp this–physically attracted to me. I usually poo-poo the whole beauty thing and some days I don’t comb my hair and I tell my husband I want to be androgynous, so obviously I’m no sexpot, but there was great wisdom involved in programming dudes to be inexplicably drawn to women physically. Because it has saved my marriage on more than one occasion.

Speaking of saving, you know how I had a hand in rescuing that dumb cat the other day? Well, I’d like to report that finally I put up Found Cat posters and on that very day–a windy, rainy morning, nearly two weeks after her rescue–the cat we called Betty Bumbles wasn’t in her “normal” spot on my patio furniture. She had gone missing.

I shuffled into my rainboots and slicker, grabbed our ugly gold umbrella, and was on the verge of heading out with my daughter to find Betty when just as I was turning the door knob, the phone rang.

My husband answered. He held up his hand. “Wait,” he mouthed to us.

Turns out Betty, on her own, eventually wandered home. The cat’s owner, who referred to “him” as Shadow, had called our number (off the poster) just to let us know that the cat had come home. The woman was thrilled to have her cat back.

We’d fed the cat for more than a week, and had even given Betty a treatment for fleas. But Betty/Shadow finally found his/her own way back home.

Moral: When we get lost, we can find our way home.

Third Moral: Nothing is certain, least of all the gender of a cat.

5 thoughts on “Finding a way back”